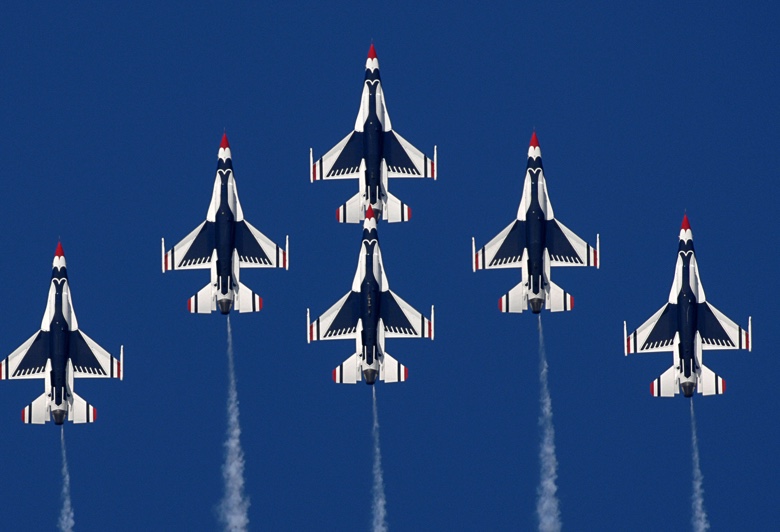 The USAF Air Demonstration Squadron ("Thunderbirds") is the air demonstration squadron of the United States Air Force (USAF). The Thunderbirds are assigned to the 57th Wing, and are based at Nellis Air Force Base, Nevada. Created 66 years ago in 1953, the USAF Thunderbirds are the third-oldest formal flying aerobatic team (under the same name) in the world, after the United States Navy Blue Angels formed in 1946 and the French Air Force Patrouille de France formed in 1931. 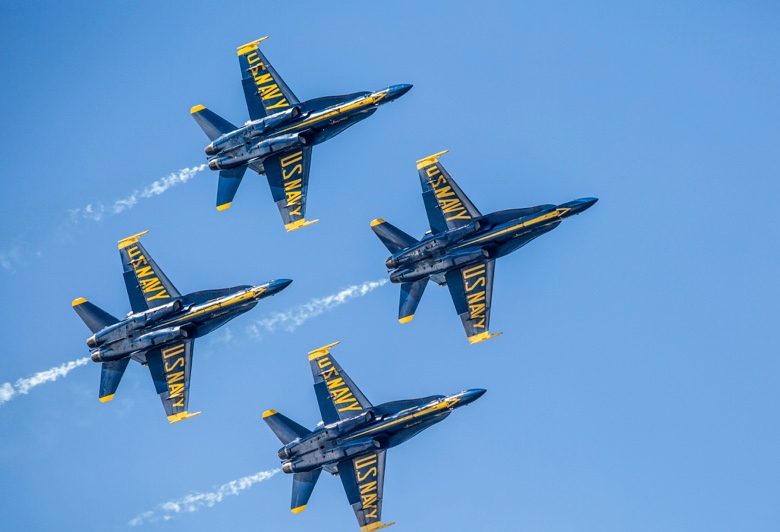 The U.S. Navy Blue Angels is the United States Navy's flight demonstration squadron, with aviators from the Navy and Marines. The Blue Angels team was formed in 1946, making it the second oldest formal flying aerobatic team (under the same name) in the world, after the French Patrouille de France formed in 1931. 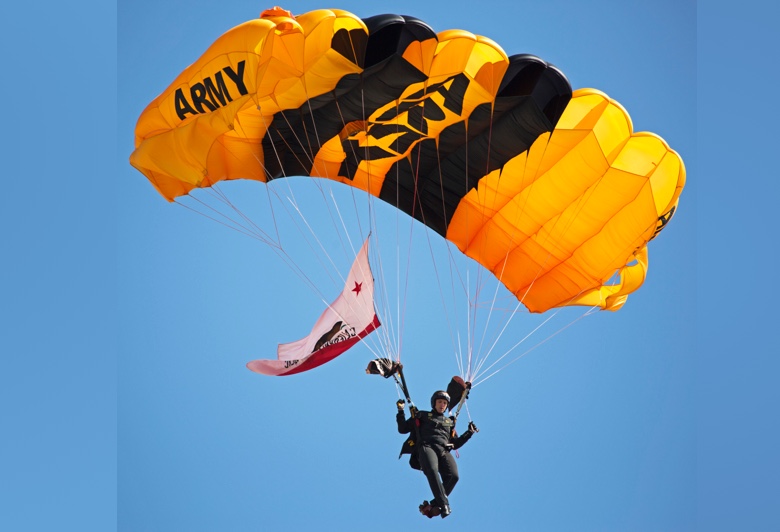 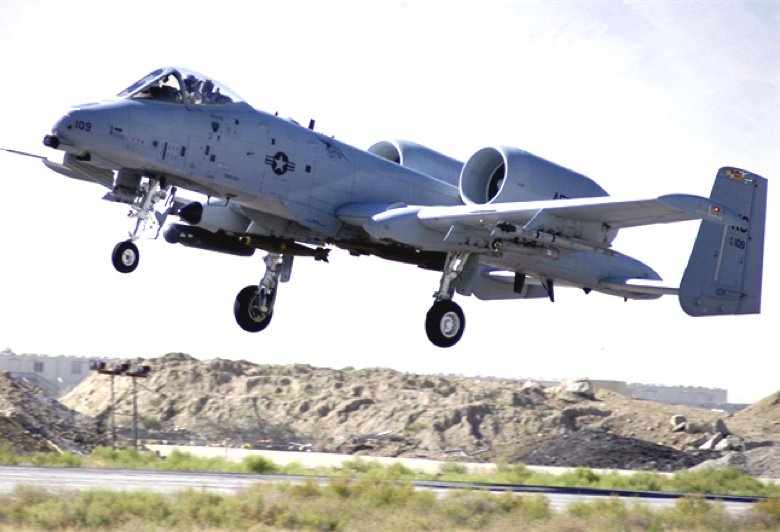 The A-10 is the Air Force's premier close air support aircraft, providing invaluable protection to troops on the ground. The Air Combat Command A-10C Thunderbolt II Demonstration Team, stationed out of Davis-Monthan Air Force Base, Arizona, brings the aircraft to air shows around the country to showcase the unique combat capabilities of the A-10 "Warthog." 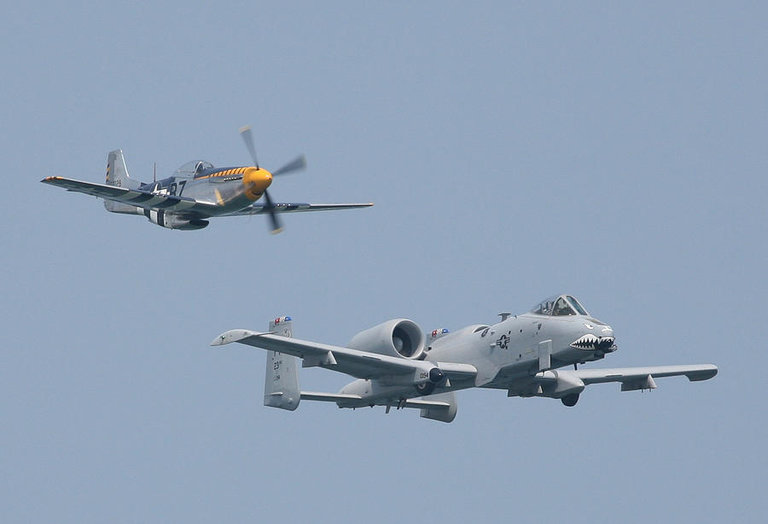 The Air Force Heritage Flight Foundation is a 501(c)(3) nonprofit organization that was formed on December 6, 2010 with the primary charitable mission of providing Heritage Flights to the public. These performances feature modern fighter and attack aircraft flying alongside World War II, Korea and Vietnam-era planes in a dramatic display of our nation's air power history. 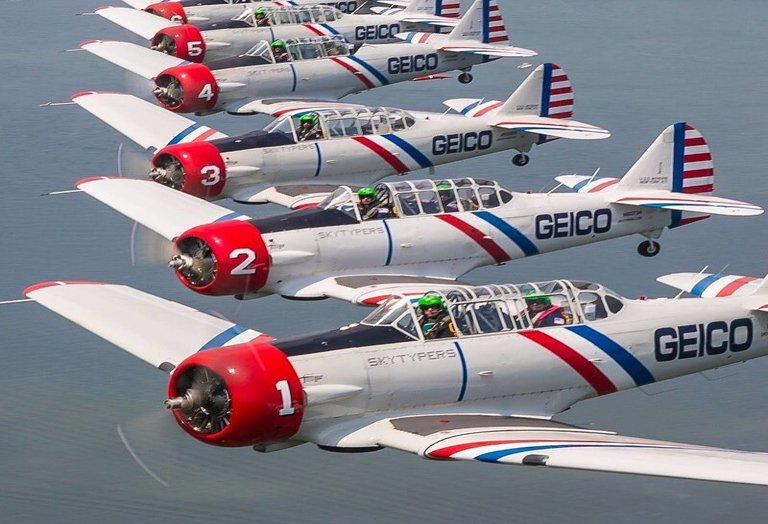 The World Famous GEICO Skytypers Air Show Team is a flight squadron of six vintage WWII aircraft performing precision flight maneuvers at select air shows across the US. The diverse flying expertise of the team members aligns perfectly with the unique components of their overall performance. 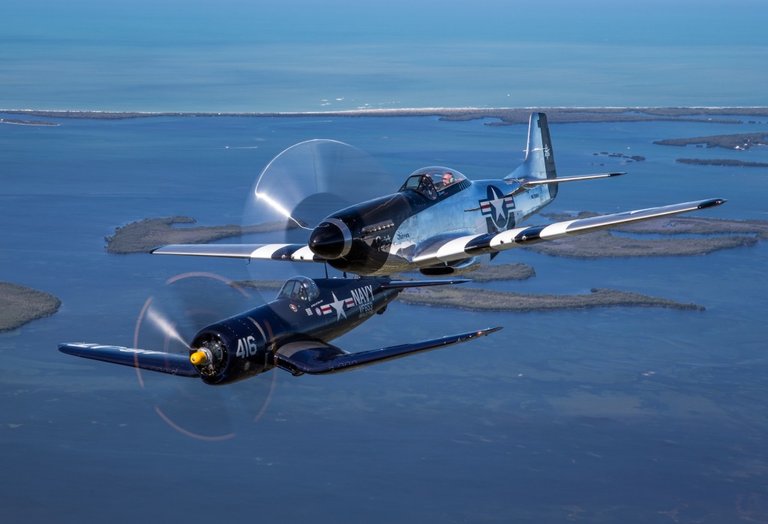 The Class of ‘45’s mission is to preserve and honor the service of American military men and women, both then and now. In flying these legendary machines, we remember their service, their contributions, and our obligation to never let their sacrifices be in vain. 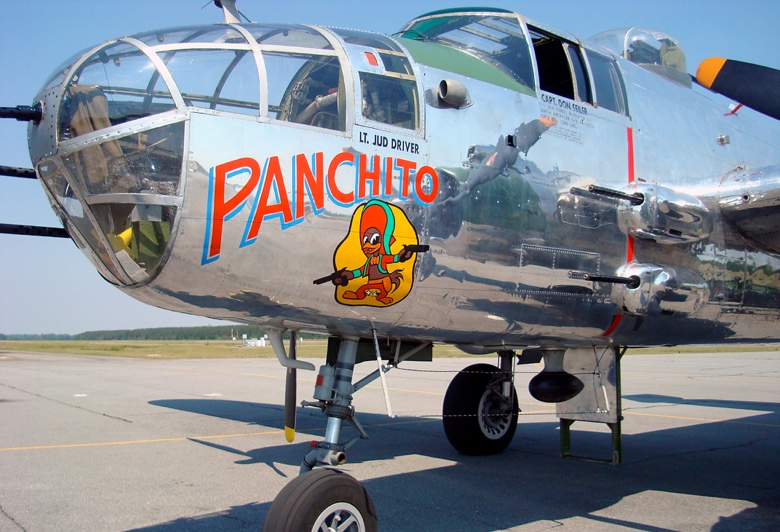 The B-25 was in production before the U.S. entry into the war through VJ-Day. About 9,815 B-25’s were built. This was the largest production of U.S. twin-engine combat airplanes in World War II. B-25’s were used in all theaters of war from Alaska to North Africa, China, Europe and the Southwest Pacific. 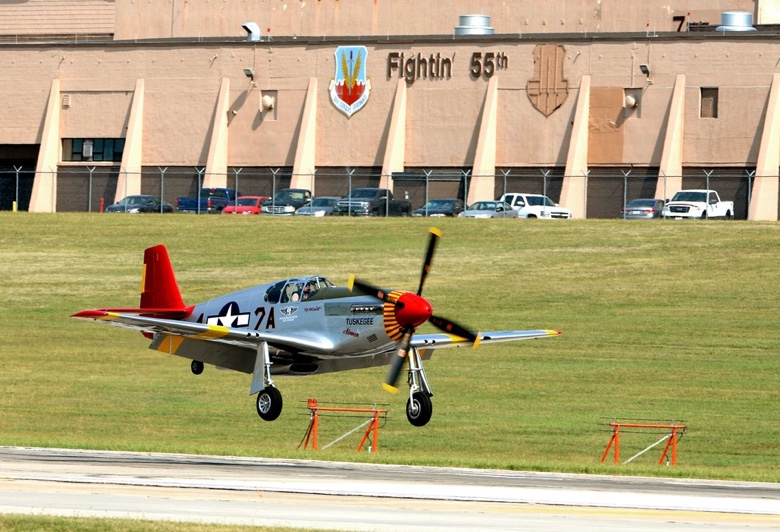 The CAF Red Tail Squadron’s P-51C Mustang, named Tuskegee Airmen, is an authentic and fully restored operational fighter from the World War II era. This awe-inspiring aircraft sparks conversations to educate young and old alike about the often-overlooked history of the Tuskegee Airmen that flew this same model as their signature aircraft in World War II. 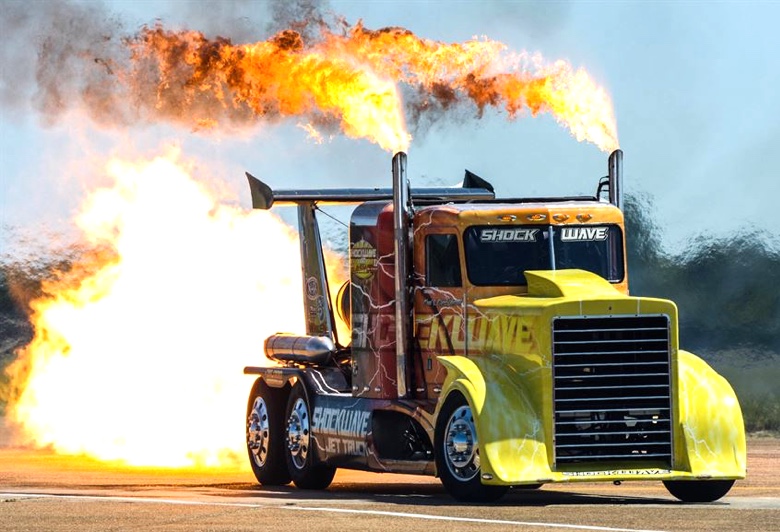 Shockwave is the first of the Shockwave trucks. It currently holds the world record for jet-powered full-sized trucks at 376 miles per hour (605 km/h). The truck has three Westinghouse J34-48 jets, which allow the truck to complete the quarter-mile in 6.63 seconds. Shockwave is currently being driven by Chris Darnell. 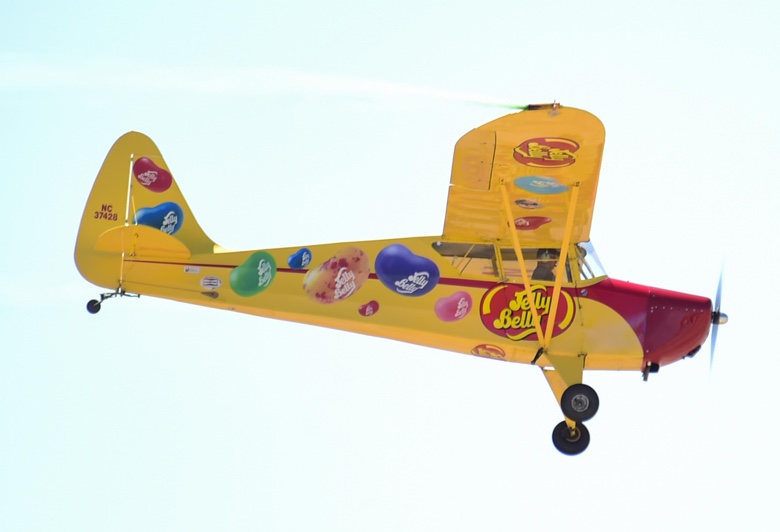 Kent Pietsch fell in love with flying when he was four years-old. Five decades later, his passion has not waned. Since 1973, Kent has performed his incredible aerobatic routines for millions of people at more than 400 shows that have taken him to quality venues throughout the United States. 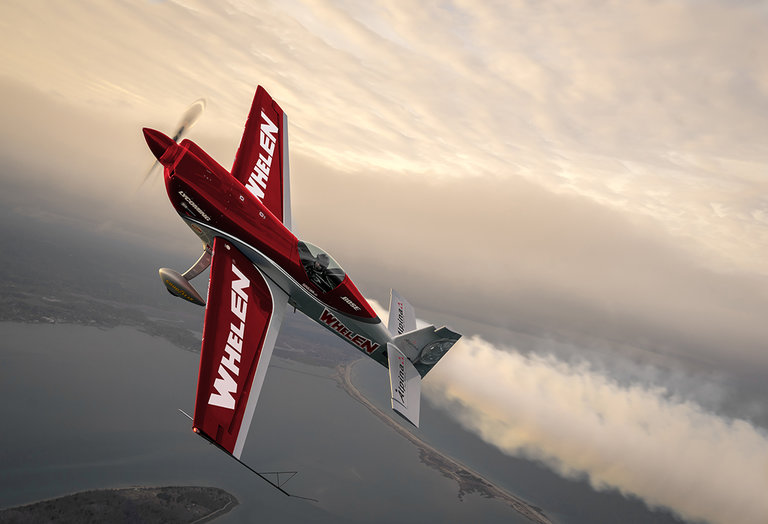 Goulian Aerosports is very proud to announce that for the 2019 season, its Extra 330SC will be adorned in the colors of Whelen Engineering Company, Inc. Whelen has been a key partner for many years with Mike Goulian, but with a new Whelen Motorsports paint design, the visibility of their great partnership will be on display for aviation and motorsports fans around the globe. 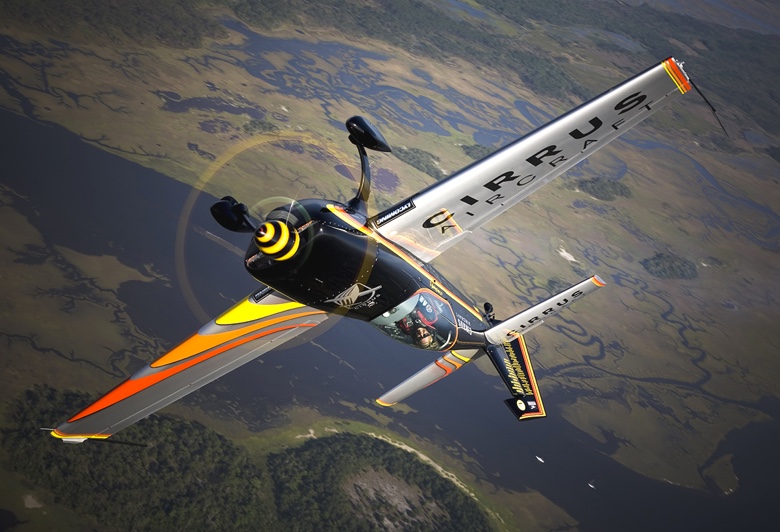 Patty Wagstaff, one of the world’s top airshow pilots, flies thrilling, low-level aerobatic demonstrations before millions of people each year. Her breathtaking performances give airshow spectators a front-row seat view of the precision and complexity of modern, unlimited hard-core aerobatics. Her smooth aggressive style sets the standard for performers the world over. 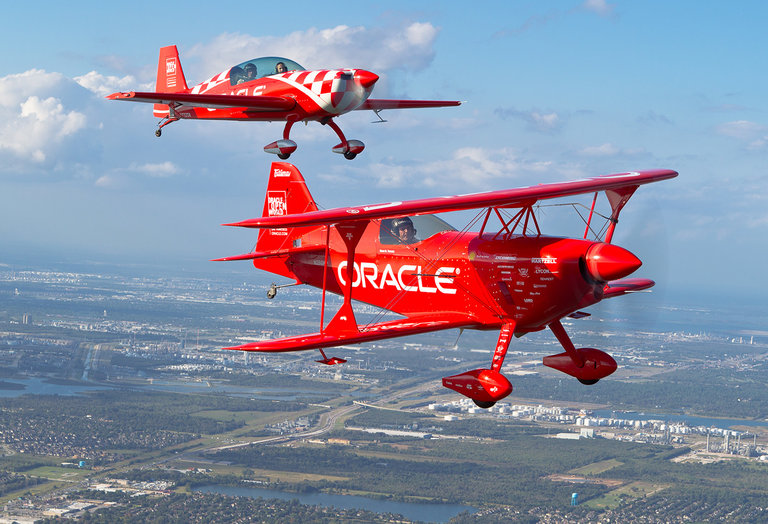 Sponsored by the Oracle Corporation, Sean Tucker and his team perform in air shows worldwide as Team Oracle. Sean has been flying airshows worldwide since the mid-70's and has won numerous aerobatic competitions. In that time, he has flown more than 1,275 performances at more than 525 airshows, in front of more than 135 million fans. 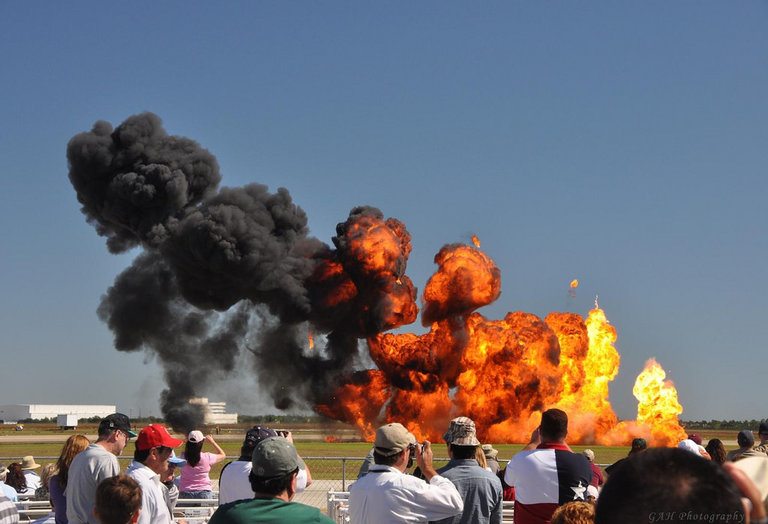 Tora, Tora, Tora began in 1972, when six replica Japanese aircraft used in the movie of the same name were donated to the CAF. The Gulf Coast Wing requested assignment of the aircraft and began developing an act for presentation at air shows. The act debuted at the Galveston Air Show on June 25, 1972. By 1977, Tora had gained national exposure. By 1978, Tora began to make international appearances in Canada and Mexico. In 1991 Tora participated extensively in the 50th anniversary year commemorations of Pearl Harbor and in 1992, Tora tackled the challenge of sending two replica Zeros to Alaska to participate in the 50th anniversary commemoration of the raid on Dutch Harbor. 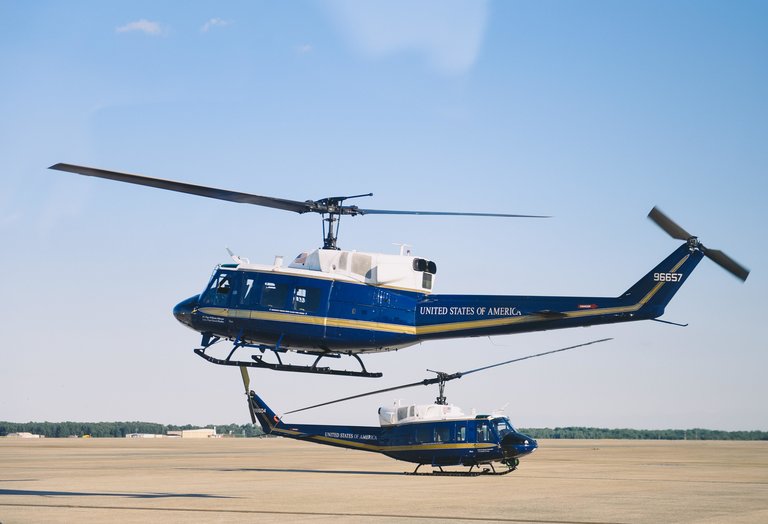 The UH-1N is a light-lift utility helicopter used to support various missions. The primary missions include: airlift of emergency security forces, security and surveillance of off-base nuclear weapons convoys, and distinguished visitor airlift. 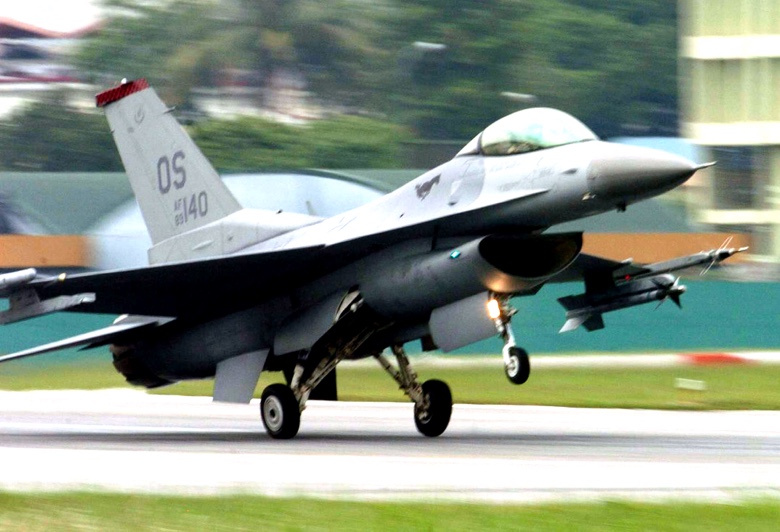 The F-16 Fighting Falcon is a compact, multi-role fighter aircraft. It is highly maneuverable and has proven itself in air-to-air combat and air-to-surface attack. It provides a relatively low-cost, high-performance weapon system for the United States and allied nations. 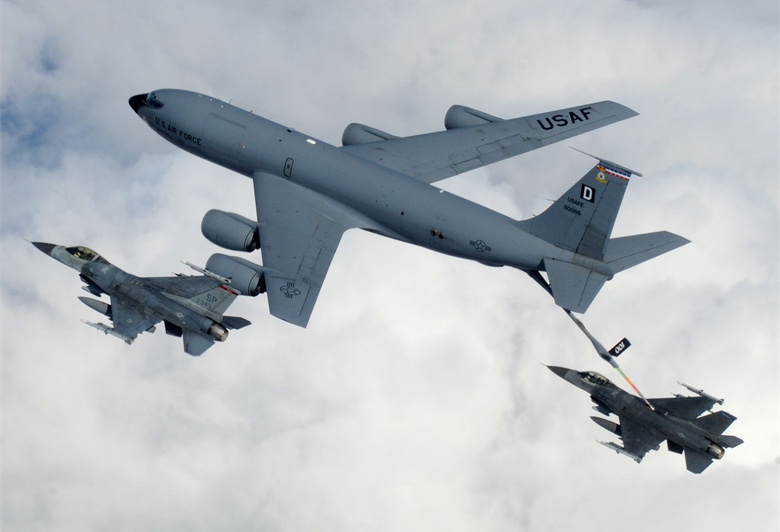 The KC-135 Stratotanker provides the core aerial refueling capability for the United States Air Force and has excelled in this role for more than 60 years. This unique asset enhances the Air Force's capability to accomplish its primary mission of global reach. It also provides aerial refueling support to Air Force, Navy, Marine Corps and allied nation aircraft. The KC-135 is also capable of transporting litter and ambulatory patients using patient support pallets during aeromedical evacuations. 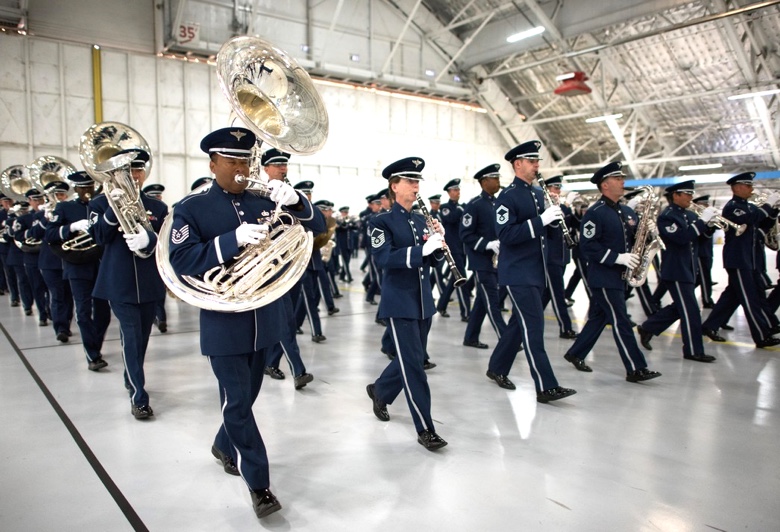 Air Force bands inspire immediate, positive, and long-lasting impressions of the United States Air Force and the United States of America in the hearts and minds of our audiences. Performing worldwide, our musicians honor, inspire and connect with over six million listeners at over five thousand live and televised events each year. 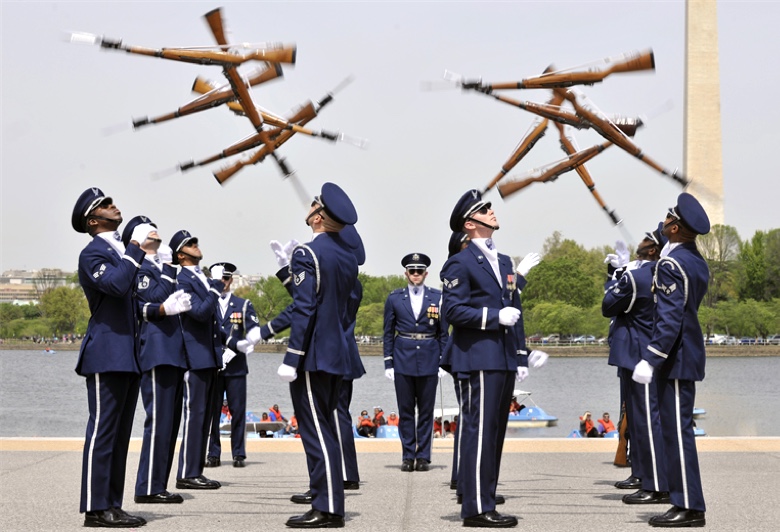